Plastic to Oil for Real? 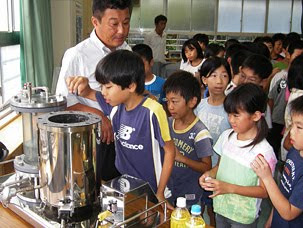 Hey, this is another short article that I posted first on Technorati and can be found at Is Plastic-to-Oil for Real?  It is nice to have an editor besides myself, but the limited subject matter and length restrictions are the trade-off. For that reason I'll have some longer posts that will be available only on my blog. So enough with that and onto the true subject matter.
As you may or may not be aware, there is a video going around about a Japanese man who has created a machine that can turn garbage plastic into oil.The video can be seen on Youtube and at first glace it reminded me of the Eternal Cycle of Free Energy 2010 Using Salt Water video that was popular a while ago.
There does seem to be a great difference between these two videos though. The Eternal Cycle of Free Energy is just a video made to entice people to waste money on numerous products based on fuel cells and easy ways to make different chemical fuels from USH2.com.
The machine itself probably works in doing what it advertises, separating the hydrogen and oxygen, but it can be guaranteed that it doesn't do so for free or for a net energy gain. The water doesn't separate itself into hydrogen and oxygen; it takes some input of energy to do so, and as the second law of thermodynamics tells us, energy put in will always result in less energy out. There is always a net loss in energy transfer; often this is in the heat that is given off.
That has been the issue that has plagued perpetual motion machines and the reason why free energy doesn't exist. Which brings up the second video, which isn't trying to offer a free lunch. What it is offering is to take yesterday's leftovers and turn them into steak. The only solid information I could find on the Japanese plastic-to-oil machine were from Big Think and Our World 2.0, but numerous people have blogged about it and it seems to just be making the news rounds now.
Both pages note that plastic waste has a high energy value and that value has begun to be captured. Number 2, 3 and 4 plastics can now be put in a machine to create oil that can be used just like regular oil. To top that off, it does it for "20 cents’ worth" of electricity.

Just like the free energy idea, it seems too good to be true, but unlike the other video, it holds up to scrutiny and doesn't violate any physical laws. In fact, Blest isn't the only company with a machine that is able to turn plastic waste to oil. 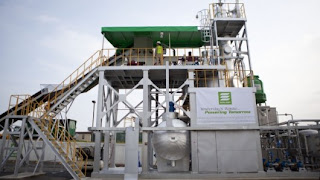 The Envion Oil Generator does exactly the same thing, but it may not be as efficient. It turns plastic into oil for less than $10 a barrel, so the days of throwing plastic into the trash or burning it might be quickly running out. These are the encouraging breakthroughs that the environment needs and in fact they are so groundbreaking that it creates some hard work to determine the scams from the real progress.
Thanks for reading,
-the moral skeptic
Posted by Stephen Machan at 4:02 PM