In 1979, Stephen J. Gould and Richard C. Lewontin saw a growing problem in the field of biology. To combat and bring attention to the problem they saw they co-authored the paper entitled, "The Spandrels of San Marco and the Panglossian Paradigm: A Critique of the Adaptationist Programme" which is now a classic and somewhat controversial paper in the field of biology.  Gould points out in I Have Landed that, that paper is his second most referenced paper behind only his paper with Eldredge on punctuated equilibrium.

The problem Gould and Lewontin saw was that every part of an animal's anatomy was being broken up and explained as having an evolutionary purpose. The tyrannosaur's small arms were to help it get up from sleeping and the female hyena's masculinized genitalia created aggressive/larger hyena. Those types of explanations typified the attitudes of much of the scientific community, which could be described as being extremely adaptationist. Each piece or feature of an animal was broken up and weighed; if something existed it existed for a Darwinian reason. The animal as a collective whole was never thought about.  Noses were created to hold glasses and ears to fit earplugs.

Yet, no matter how ideal the reconstruction of the purpose is, it remains a narrative created to explain something that doesn't always have such a simple, fitting, or, most importantly, purposeful explanation. There are numerous reasons why a feature of an animal might be the way it currently is and being a positive adaptation for increased fitness is only one of those reasons. 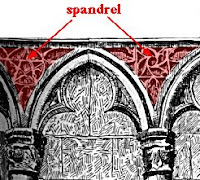 Lewontin and Gould point this out by way of the dome in St. Marks Cathedral in Venice, and by picking out this non-biological example they have created a platonic form for what a  perfect spandrel is, more perfect and clean than any biological example could be.  It is perfect because the dome was created, as many other domes were, with the four arches holding it up and the spandrels existing between those arches. Only years after construction did the spandrels get put to use and thus become meaningful/functional in themselves.

The architectural spandrel, in this instance, is a space created only because it was necessary as part of the gap between the arch and the dome. More generally they refer to an architectural constraint that is not part of the design, but instead a by-product of what is necessary from the design. Gould and Lewontin give the example also of a set of stairs with the bi-product or spandrel being space between the steps. 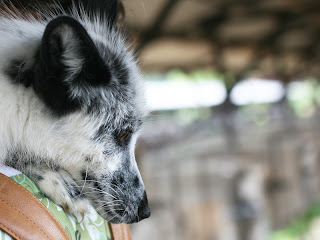 A good example of this happening is the famous domestication of the Silver Fox in Russia. The only feature that was selected for in those foxes was tameness. This made tameness the adaptive feature being selected for and all other traits that changed with it would be spandrels, or features that just happened to be by-products of the result of one thing being selected for. These changes included the fox's becoming spotted, coming into heat every 6 months and becoming more 'dog-like.'

This seems to show the existence of spandrels as pretty clear-cut, but the most interesting part of spandrels may be hidden in an article written later by Gould, "The Exaptive Excellence of Spandrels as a Term and Prototype." Near the end of that article, Gould makes the open-ended statement that,


"The human brain may have reached its current size by ordinary adaptive processes keyed to specific benefits of more complex mentalities for our hunter-gatherer ancestors on the African savannahs. But the implicit spandrels in an organ of such complexity must exceed the overt functional reasons for its origin. (Just consider the obvious analogy to much less powerful computers. I may buy my home computer only for word processing and keeping the family spread sheet, but the machine, by virtue of its requisite internal complexity, can also perform computational tasks exceeding by orders of magnitude the items of my original intentions—the primary adaptations, if you will—in purchasing the device)."

It seems that as a brain becomes more powerful, it does a more than just what is required for base evolutionary fitness. The examples of those types of spandrels have been argued to include everything from music or even language. I think an interesting area to apply the idea of a spandrel to ethics; the things people feel passionately are right and wrong, but for what reason? It could also fill in a lot of gaps in what is ethical, but can't be evolutionarily accounted for and that is what my thesis is on, so you can look forward to quite a few more posts on this topic in the future.

Thanks for reading,
-themoralskeptic
Posted by Stephen Machan at 11:05 AM